Lebanon: Traditional Sewing as a Source of Income among Women 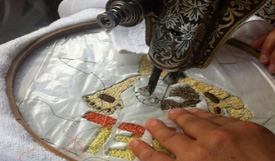 In the Minya region near the Lebanese capital of Tripoli, sewing arts have a long tradition, having been practiced by the women living there for centuries. Sewn pieces are an integral part of every household, and are put on display at weddings and other special occasions.  "Brode tes idées" – or, “sew your ideas”, is how women describe their approach to sewing. Ms. Wafaa Oman learned traditional sewing techniques over many years of training and practice. She now runs the sewing project for women in the Minieh region. In the two phases of a project to support this craft, Ms. Wafa will first organize seminars during which she passes on her knowledge to the region’s women. In the second phase of the project, she will develop further sewing workshops for women. The seamstresses will thus exercise and improve their craft, making popular products for the market. GFA BRIDGES has made ​​€5,000 available for the purchase of material and sewing machines. 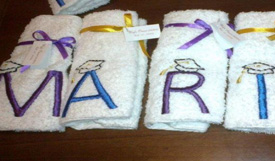 The aim of the project is to pass on traditional sewing arts and preserve them, while supplying women in the region with an additional source of income. This not only contributes to women’s self-esteem, but also to their reputation in the area. The seminars and study rooms are also intended as a meeting place for women  ̶  a location in which they can promote the exchange of ideas and find mutual support.