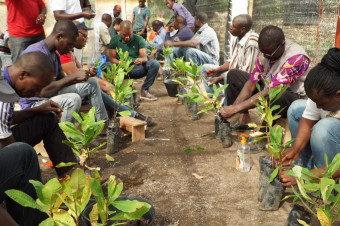 For four years, GFA experts have been engaged in developing innovative solutions for the sustainable management and protection of the Taï and Comoé National Parks in Ivory Coast. These efforts have been part of the GIZ project PROFIAB II, which was completed in April 2020, in a period already affected by the pandemic.

Today, the national park management authority (OIPR) has an attractive website to promote its 14 protected areas. A standardized GIS database is accessible online now and allows for better monitoring of wildlife and habitats. As a result of effective training, park rangers have been put in a better position to deal with poaching and illegal gold mining.

A radio campaign, conceptualized by the GFA team, has been promoting and supporting the OIPR efforts. Two fictitious nature guardians called “Papi Tai” and “Mémé nature” as two very old but vivid residents of the parks keep telling their children and grandchildren stories about the park, thus spreading key messages through local radio stations to the surrounding population about the role of the parks and the importance of safeguarding them.

PROFIAB II has been providing support to the production, transformation and trade in four main agricultural value chains, namely cocoa, cassava, cashew and onion. Many innovations have been introduced in these value chains. The cashew sector in particular has benefited from a completely new understanding concerning the exploitation of previously unused yields from fruit plantations. Moreover, new pruning methods have increased the productivity and quality of the nuts, which opened up new perspectives for agricultural intensification. The government reacted positively and quickly by adapting the national didactical material and launching a rehabilitation program based on the newly introduced techniques. As a result, trainings and visits to the demonstration plots have been organized for researchers, private companies and governmental institutions from most of the African cashew producing countries.

A three-year promotion of the cashew apple, which used to be left on the ground as waste, started bearing fruits as many individual initiatives for the processing and sale of apple-based products opened up a potential five million tons of raw material.

The GIZ project Pro2GRN will take over and continue support and advice to OIPR. National experts as well as numerous trained and highly motivated partners and target group members will continue to use and disseminate the innovations that have been successfully introduced by the GFA team of consultants.