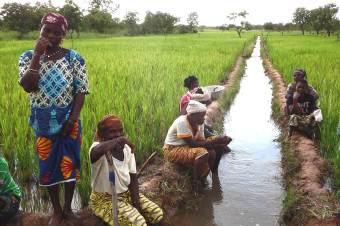 On 18 February 2020, GFA presented the climate change adaptation measure "Smart-Valleys" at GIZ headquarters in Eschborn. This specific adaptation measure was introduced successfully in the “Project on Adaptation of Agriculture to Climate Change” (PACC), implemented by GFA in Benin. GIZ planners of the working group Water & Agriculture as well as employees from different agricultural GIZ projects, connected via video, were among the participants of the presentation.

Due to climate change, the rainy season in Benin is increasingly delayed and ends earlier than in the past. Additionally, periods of drought and heavy rainfall during the rainy season are becoming more frequent. The Smart Valleys approach makes it possible to better adapt wet rice cultivation to the effects of climate change. This technically very simple and cost-efficient innovation enables better water management in the rice-growing areas through the construction of canals and dams, thereby increasing the resilience of rice cultivation to the steadily decreasing availability of rainwater. In comparison to the traditional rice cultivation, the harvests in the Smart Valleys more than tripled on average.

The PACC was conducted by the GFA in Benin from June 2014 to November 2019. The aim of the project was to adapt Benin’s agriculture to the consequences of climate change, such as more frequent and severe droughts, precipitation that is more irregular, and higher temperatures. To this end, the impact of climate change on agricultural production and possible adaptation measures were identified together with the population in nine water catchment areas.

> More information about the project