Moroccon delegation on a study trip to Freiburg, Germany 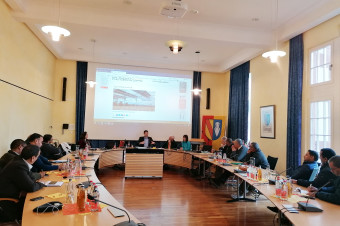 As part of the EDMITA project financed by GIZ and implemented by GFA, 14 mayors, deputy mayors and other representatives of the communities of Midelt, Er-Rich, Tata and Foum El Hisn, Morocco, went on a study tour to Freiburg between 9 and 13 December 2019. The four communities were supported by the project in the formation of special teams, capable of mastering energy management dashboards and making optimizations in energy expenditures.

The program included various activities: We organized a guided tour of the city of Freiburg, including the Vauban district where former military barracks were transformed into a positive-energy residential district. Presentations on urban development and energy efficiency in buildings and the role of citizen participation in these projects were also part of the program. We also arranged discussions with mayors and municipal officials on municipal energy management and energy accounting, taking into account the criteria of the European Energy Award, and visits to renewable energy installations (wind, biogas, solar PV) in the Black Forest region.

The visit was organized by the association Innovation Academy Freiburg, the official partner of the Green City Freiburg and responsible for organizing excursions on sustainable development in this model region for climate protection in Germany.

Photos: Discussion with the mayor of the municipality of Denzlingen / The Moroccan delegation to the community of Vorstetten

> Detailed information about the project. 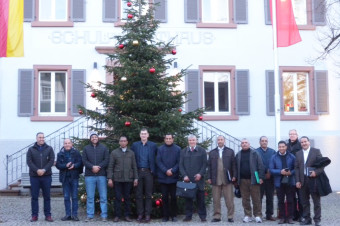