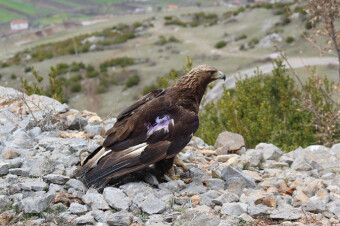 On 13 April 2021, a Golden Eagle was released at the Prespa National Park in a ceremony recognizing the threatened status of the emblematic bird and national symbol of Albania.

The Golden Eagle was found in the Skrapar area last February, injured by a shot and unable to fly. The bird was brought to the rehabilitation center for wild birds in Divjaka-Karavasta National Park. After two months the eagle was ready to fly again in the skies of Shqipëria, the Land of the Eagles, as Albania is called by its inhabitants. Golden Eagles can rarely be observed in the wild. The National Agency of Protected Areas (AKZM)therefore turned the bird’s unfortunate situation into an opportunity. Supported by experts and the Transboundary Biosphere Reserve of Prespa project, a GPS tracking device was placed on the back of the majestic bird.

This is the first time ever that such a Golden Eagle has become the subject of a scientific study on its airways in Albania. Biodiversity experts and AkZM will be able to monitor and study the habitats of the bird for years to come. Even though the Golden Eagle represents Albanian national pride, it has become threatened due to poaching and disturbance of its nesting habitats. The bird lives in hilly and mountainous areas, and prefers habitats with rocks and trees as can be found in the heights of Prespa National Park.

The Prespa project is financed by KFW Development Bank and implemented by GFA Consulting Group. It aims at the preservation of the natural and cultural values of the Reserve’s globally recognized biodiversity hotspot in line with the socio-economic development dimension in the Prespa region. The project’s phase II, 2018 – 2022, focuses on the reduction of the pressure on natural resources and biological diversity, on poverty reduction and livelihood improvements of the local population.
Project in brief