BRIDGING THE KNOWLEDGE AND SKILLS GAP IN DAIRY HUSBANDRY IN KENYA 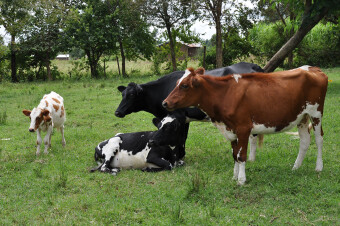 On behalf of the Green Innovation Centres for the Agriculture and Food Sector (GIAE) program of Deutsche Gesellschaft für Internationale Zusammenarbeit (GIZ), GFA consultants are implementing the dairy value chain component that aims at increasing productivity and income for smallholder dairy farmers in selected counties of Western Kenya. Financed by the German initiative One World Without Hunger, innovations and the alleviation of technical challenges is to strengthen the regional food supply. GFA develops and implements  training modules on e.g. fodder production, feed formulation, feeding dairy cows, and calf rearing.

In May 2018, a total of 1,400 smallholder farmers, 48% of them female, were trained using a four-topic by four-day training cycle approach. A questionnaire-based survey was carried out six months later among a random sample of 432 trainees. Data obtained was subjected to descriptive statistical analyses of frequency counts, percentages and means to determine the level of, limitations to and the impacts of adoption. In terms of fodder production, adoption of innovations was highest in establishing fodder plots (65.6 %). The biggest obstacle (41%) to the implementation of innovations on farms, especially related to silage making, was the availability of material. The feed formulation module comprised calculation and formulation of rations to provide a balanced and nutritive ration, a fairly new concept that 20% of participants had their first interaction with during trainings. Calculations was the concept least known to participants, with 56.7% of them viewing it as new. The emphasis of the training module on dairy cow feeding practices was on dairy cow husbandry and feeding. Challenge feeding, total mixed ration and weight-based feeding were new innovations to over 40% of participating farmers. Total mixed ration concepts of cow feeding had the highest adoption rates (40 %). Again, the adoption of concepts was mainly hampered by the availability of materials (48.3 %). The focus of the calf rearing module was on pre- and post-natal management to avoid losing the calf and to guarantee a highly productive adult cow. Most related aspects were new concepts to a majority of training participants, and a large proportion of participants in the training (37.4 %) did not put into practice the concepts they learned. This was primarily due to participants not having calves on their herds at the time of training (40.4 %).

The fodder production module was the most adopted (64%) of the four modules of training, followed by dairy cow feeding (43%), calf rearing (39%), and feed formulation (37%). The average comprehension of training content for the four training modules was 69.8%. Factors influencing the rate of adoption of the module content taught included availability of material, cost of material, land, climate (weather), and difficulty/ complexity of content. Availability and cost of material were the main obstacles to adoption of module contents.

The training resulted in an increase of up to 0.7 acres of land surface under fodder production per farm among 70 per cent of trained participants. Increased milk productivity (up to 4 liters/day), and conservation of fodder by baling hay and ensiling was reported by 80% of farmers, who adopted on-farm feed formulation. Farmers also earned extra income from the sale of fodder and formulated feed rations at farm level. As a result of the training, fodder production, dairy cow feeding, feed formulation and calf rearing between 58-95% of participants realized improvements.

Hence, a conclusion from the training is that smallholder dairy producers have the ability to apply technologies that enhance productivity of their farms if they are comprehensible, practical and within means to implement. More complex content such as feed formulation may require more training sessions with more practical sessions and relatively longer grace periods for adoption. ¬With improvement in productivity, there is also a need to focus on enhanced efficiency of production and post-production segments of the value chain.