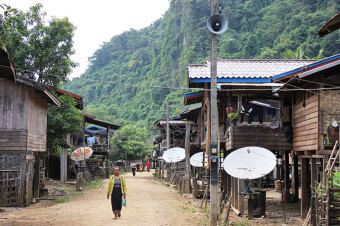 In a rare long-term assessment of environmental communication in development assistance, the 2021 summer edition of the Global Media Journal (GMJ) analyzes a Lao-German project over a 10-year period from 2011 to 2021, the latest stage of which is currently implemented by GFA on behalf of GIZ. In cooperation with the Lao Ministry of Natural Resources and Environment (MoNRE), the project started as ProCEEd – Promotion of Climate-related Environmental Education with a 10-step environmental education and communication strategy (EECS ) based on Knowledge-Attitude-Practice (KAP) surveys and an edutainment approach. In 2017, ProCEEd became the Environmental Education and Awareness (EEA) output of GIZ-ProFEB - the Protection and Sustainable Utilization of Forest Ecosystems and Biodiversity program. In 2019, the EEA output was outsourced to GFA and will be completed in early 2022.

As outlined below, the GMJ article’s conclusions drawn from the project’s communication strategy were mostly positive. But, after ten years, it still remains to be seen whether the project’s relative success will last. When GIZ funding of mass media campaigns ran out in late 2017, Lao radio and TV stopped the high-quality Our Environment programs. Semi-annual environmental tours to 85 rural villages and towns, and the multi-media events they staged were very popular and the most trusted source of environmental information. But they are also costly – financially as well as in terms of staff and skills so that MoNRE could hardly manage them alone. When GIZ stopped regular funding of the tours in 2019, only isolated road shows using the environmental vehicles could take place. A donor is needed for funds, and NGOs for their organizational and pedagogical skills. 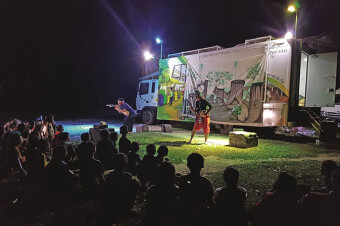 This is where the GFA team came in to assist ProFEB with EEC measures that focus on human capacity development of government and civil society partners, and scaling up and mainstreaming their environmental education and communication (EEC) experiences and competencies. Despite Covid-19 restriction in 2020-2021, EEC measures jointly implemented by government and civil society partners are intended to increase knowledge of and foster positive attitudes and practices towards the environment among Lao citizens and government representatives. What should remain is the change in the heads and hearts of the people the project trained, touched and reached out to.

The GMJ article starts from an overview of the project context and the media landscape in Laos, the conceptual framework of the communication strategy at the policy and project management level, and the results of KAP surveys on environmental awareness in 2012, 2016 and 2019. Major features of the wide variety of EEC media productions and materials are highlighted and impact assessment results conclude lessons that can be learned from the project’s communication strategy.

The project’s outreach was concluded as wide – almost 66% of respondents in the 2016 and 2019 awareness surveys had watched, listened to or read mass media productions supported by ProCEEd and ProFEB. Even though the project stopped supporting the weekly radio and TV programs "Our Environment" in late 2017, these programs had a wider audience among respondents in 2019 than in 2016, which speaks for their popularity. Media users felt better informed than non-users about climate change (+21%) or the extinction of wildlife (+15%). Survey respondents consistently put “protecting the environment” their second most important topic on a national policy agenda after “promoting education” in 2019, 2016 and 2012. Yet, an alarming proportion of steadily about 40% of respondents over the period of 2012-2019 believes that the environment is not in danger. Such utilitarian attitudes towards the environment were shared a lot more by younger than older, and more by urban than rural respondents. Academic and civil society stakeholders working in the environmental sector stated that the content of the radio and TV features produced by ProCEEd project’s partners improved significantly over time as more than 77% confirm an improvement of environmental journalism, and half of them followed project-supported environmental features on the radio, on TV or in newspapers. The audience- and infotainment-orientation of environmental radio programs at the province and district level attracted audiences' attention and curiosity as they convey locally relevant news and stories with innovative formats such as VoxPop or radio drama.

This relative success explains why the project’s 10-step communication strategy design, including the awareness survey approach, were taken over by regional climate- and biodiversity-related GIZ programs in Central Asia, the South Caucasus and Mongolia. Parts of the EEC manual were adapted by the Mongolian GIZ project. MoNRE is the only environmental education focal point in any ASEAN country that has repeatedly conducted environmental awareness surveys – in 2012, 2016 and 2019. 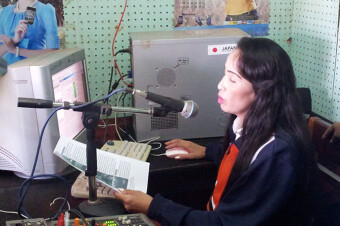 Based on these KAP results, the project’s EECS defined target groups and communication objectives as well as promising media and messages. A wide variety of hundreds of mass media products, learning aids and materials have mutually supported each other. These were complemented by efforts to promote environmental journalism, which did not exist in the country before. A total of 12 feature film, 68 radio episodes, and 30 environmental video clips were produced and broadcast several times on national and local TV and radio channels. 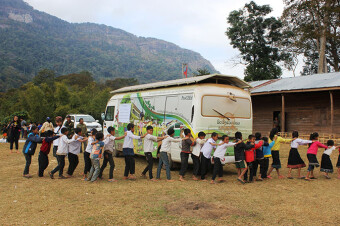 The media campaign was complemented by non-formal environmental education. Based on regular, highly interactive and participatory human capacity development, three main approaches were combined: Regular environmental tours to remote villages, performances and stands at major socio-cultural events, and a variety of awareness raising activities at the local level, including people’s theatre, and outdoor learning groups at school. These Head-Heart-Hand (H3) approaches promote major facts about six main environmental themes – climate change, forest, biodiversity wildlife and protected areas - and combine information and entertainment so that people are touched in an attractive and relaxed atmosphere. All elements are to stimulate the brain for knowledge, emotions for motivation and action for a behavior change. Between early 2013 and late 2018, a mixed team of government and NGO volunteers running a bus and a truck regularly visited more than 80,000 residents in 85 rural communities of four Lao provinces. They reached more than 500 government officials and mass organizations in provincial and district capitals. As volunteers come and go, training efforts need to be repeated. To date, more than 300 government and NGO staff have developed their capacities this way, since 2020 in a 4-level career pathway. In 2017, the project began its exit strategy by compiling its wide variety of media products and learning aids, training curricula and materials in a manual on Environmental Education and Communication in Laos (1-environmental tours, 2-training efforts, 3-environmental education and communication tools, and 4-environmental journalism), and a Media Kit .