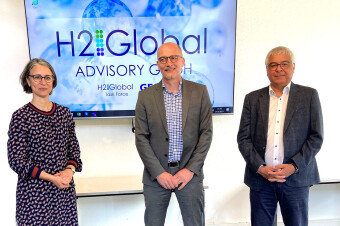 On May 21, 2021 GFA Group registered a new company, the H2Global Advisory GmbH, in the context of the H2Global support mechanism of the Federal Ministry for Economic Affairs and Energy (BMWi) to promote international supply chains between the German and European industry and green hydrogen (H2) producers abroad, thus promoting green hydrogen as a key component on the road to a decarbonised, climate neutral industry in Germany. Conceptual and preparatory work of H2Global was led by the H2Global TaskForce, an interdisciplinary expert team headed by GIZ in close cooperation with the German Hydrogen and Fuel-Cell Association (DWV), relevant stakeholders from the private sector, and the Federal Government.

The H2Global Advisory will act as the trustee and office of the planned Hamburg-based innovation cluster, the H2Global Foundation, which will develop and implement application-oriented concepts for green growth and, furthermore, for the defossilisation of emission intensive sectors. Beside these types of concept development, the H2Global foundation aims to strengthen the international cooperation for a worldwide mobilisation and coordination of state- and privately financed measures for a sustainable development and stronger climate protection. Additionally, the foundation oversees the compliance with BMWi and other funding terms. 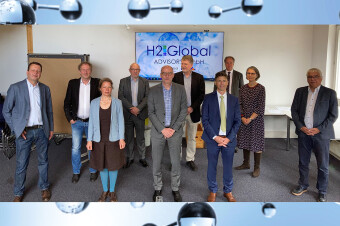 Starting in September 2021, Markus Exenberger and Timo Bollerhey, former GIZ H2Global Task Force members and energy efficiency experts will act as managing directors of H2Global Advisory GmbH. The core business of the new company is the management and organization of the foundation as an innovation cluster. In addition, H2Global Advisory advises BMWi and the foundation on the design of framework conditions and provides consulting services to the private sector in Germany as well as in possible producer countries. This includes scaling up the approach in Europe and beyond.
This is where H2Global and the new company kick in: The H2Global support mechanism allows German companies to switch to green hydrogen as an energy source without economic losses in comparison to the status quo usage of fossil energy carriers. Its bridging mechanism works in a way that the so called HINT.CO – the foundation's own Hydrogen Intermediary Network Company – auctions green hydrogen or a derivative abroad at the lowest possible price issuing long-term contracts. The available hydrogen product is then auctioned off to companies in Germany at the highest possible price. These hydrogen sales agreements will be issued for much shorter periods which allows the HINT.CO to benefit from an expected rising demand and hence rising prices for green hydrogen products. The difference between the purchase and the sales price is compensated through the HINT.CO. The German government will support the H2 market ramp-up fully covering the losses made by the intermediary company with up to 1 billion euros over 10 years.

Within ten years, this type of support is intended to set a price for internationally produced green hydrogen and its derivatives based on long-term contracts that does not need the H2Global support mechanism any more also benefitting from a stricter regulatory framework, incentivizing the usage of CO2-neutral energy carriers.