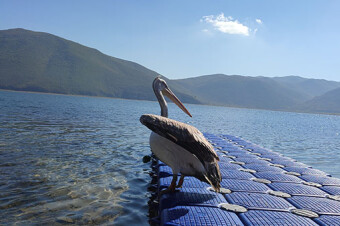 If you remain curious about whatever happened to the golden Eagle ’Mati‘ after release in Prespa National Park, then here’s an update: During the first three months Mati covered a total distance of 1,978 km with an average daily flight distance of 20 km/day during that period. The Eagle stayed within a territory of 6,800 km² in Greece and Albania and is currently in the Skrapar Region of Albania, where initially located.

In the meantime the KfW financed project, ’Transboundary Biosphere Reserve of Prespa‘ continues its efforts in wildlife monitoring. Recently, the Curly Pelican ’Zaveri‘ was released in Great Prespa Lake in Prespa National Park, three months after being found wounded in Lake Ohrid. The rehabilitation began on July 31st at the rehabilitation centre for wild birds in Divjaka-Karavasta National Park. The National Agency of Protected Areas turned this unfortunate circumstance into an opportunity. Thanks to the support from experts and the PRESPA project; a GPS tracking device was carefully attached to the back of this emblematic bird and the pelican is now ready to swim and fly again. For Albania, this is a pioneering moment for such a bird to be equipped with the GPS and become a subject for scientific studies in its natural habitat. Biodiversity experts and the park administration now have the opportunity to continuously study and monitor the habitats of Zaveri over the following years. The name ‘Zaveri’ is derived from the sinkhole that connects the Great Prespa and Ohrid lakes and was given to the bird to represent the interconnectivity.