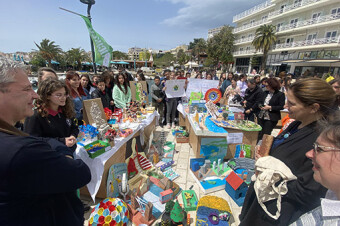 On April 18-22, 2022, the city of Saranda, Albania organized the "Saranda Recycling Week." The event culminated on April 22, which coincided with Earth Day. The participants were the Albanian Minister of Tourism and Environment, Ms. Mirela Kumbaro, the Waste Program Manager, Ms. Christine Koenig, Mayor of Saranda, Mr. Ardian Gurma, staff from GIZ and GFA Consulting Group, all the Saranda educational institutions, and stakeholders and partners of the project.

During "Saranda Recycling Week," citizens and businesses were encouraged by advertisements, social media posts, and marketing materials throughout the city to share recyclable waste and use wire mesh bins placed mainly on the promenade. There was intense campaigning in schools and businesses to join the municipality in its efforts to recycle as much as possible on the eve of the tourist season. More than 1000 leaflets were distributed to citizens, businesses, and schools. Along the promenade, 20 flags were placed, informing and making the citizens aware of "Saranda Recycle Week". A large banner was also placed in the center of the promenade.

"Green Class Hours" were held in schools where students were engaged in reusing and recycling waste through art. All the artworks prepared by each school were exhibited on April 22 at the event location, which served as an "Art Recycling Shop," where some of the artworks were bought by the attendees.

All the wire bins on the promenade were filled with recyclable waste (PET bottles and cans) and displaced at the event location. A large banner surrounded the wire meshes provided quantitative data on the benefits to health and the environment of the waste collected in just one week.

With the “Saranda Recycling Week” event, we aimed to engage citizens in recycling, avoid waste going to the sea, generate real income for the municipality, create real job opportunities, and make the city and its citizens proud of their commitment.