In 2017 the C³ Unit developed and implemented two train-the-trainer (ToT) schemes for farmers and students of Technical and Vocational Education (TVET) schools, on behalf of GIZ and as a subcomponent of the Programme “Promotion of Demand Oriented Vocational Qualification”. The overall objective of the GIZ Programme is to provide demand-oriented training and further qualification in the selected value chains of potato, cassava and the construction sector, for young job seekers, young farmers and workers in MSMEs of the formal and informal sectors, in particular unemployed girls and young women.

Both ToT schemes aimed at introducing learning modules for fields identified as relevant with regard to the needs of the labour market. Enhanced entrepreneurship skills had been identified as fundamental to improve the target group’s options for gainful employment in agriculture and construction. Focus for the courses was further put on the topics related to “Market Analysis and Marketing”, as one of the fundamental subjects relevant for entrepreneurship development. Regionally the training schemes were based in Ogun State, with case studies developed also for Plateau State (potato value chain). They were both implemented in Abeokuta and hosted by Peter Akinola Foundation (PAF) TVET School. Through the meassures,145 TVET students and 84 farmers were trained in groups of 20 participants. In addition 39 trainers were trained for both target and coached during implementation, which enables them to continue training at a good level. 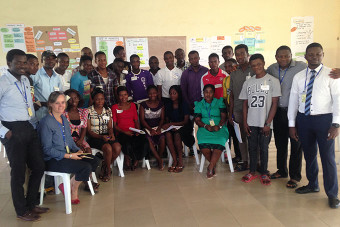